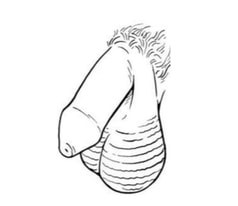 Driven by biological urges and hormonal changes in the body, the Ejaculatory Cycle is often felt as frustration, tension or anxiety.

This is what the cycle looks like; (1) Feel the build up of sexual tense, frustration or anxiety, (2) Look for an opportunity to release that tension and frustration by ejaculating, (3) Ejacuate, (4) Feel tension released and frustration subside, (5) Start all over again.

Except for a brief explosion of pleasure, most of the time you feel anxious and frustrated about when you’ll get to ejaculate again. The lives of most men are ruled by this cycle.

Ejaculation triggers the release of dopamine and oxytocin in the brain, ensuring that ejacualtion is enjoyable. Immediately after an ejaculation, you enter the refractory period. Prolactin, the hormone which subdues sexual desire, has been secreted. Feelings of needing to ejaculate, of frustration, dissipate.

Becoming aware of this cycle and how it influences your sexual behavior is important. Are you being sexual because you’re wanting to explore pleasure and connection, or are you simply going through the motions of your Ejaculatory Cycle and seeking another hit of dopamine and oxytocin?