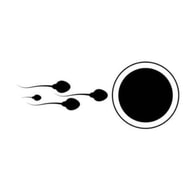 In her 1991 journal article, anthropologist Emily Martin examined how gender roles are projected onto reproductive biology, portraying eggs as passive and sperm as active. Gynaecologist Gro Nylander exemplifies this in an excerpt from her 2002 handbook on pregnancy, writing:

There she lies waiting. Big, mature, fertile. As it should be, the swelling Princess Ovum wears a crown. Not on her head, exactly. But she has a bright cell-crown all around her, the corona radiata. And here comes the prince. He is within the best room in the king’s castle. Now the last achievement remains before he gains Princess Ovum. He advances, and just before he touches her, it happens… He releases solvents, making it possible for him to penetrate the corona radiata crown and further into the interior of the ovum. He flaps energetically with his tail, drilling through the egg shell and in… From the moment she has let the prince in, she turns her other wooers away… He has fought and won.

As Lie et al. (2011) point out, this story’s protagonists, the gametes, are recognized as male and female due to their traditionally masculine/feminine looks, capacities, and aims. Nettleton (2015) also found this in her analysis of YouTube videos. Sperm are represented as little men embodying hegemonic masculinity and the most heroic sperm perilously outcompetes all others to win the egg prize. Whereas eggs are represented as featureless planets floating around without agency or action. It’s about the “journey” of the sperm; the egg has no journey. The story-line resembles the fairy-tale Sleeping Beauty.

Engelstein and Johnson (2014) note this kind of language is still used in scientific textbooks, potentially obscuring students’ understanding and undermining teachers’ accuracy. In fact, these gendered representations of fertilization aren’t all that scientific. Instead of winning the sperm race, evidence suggests that specific sperm are selected by the egg as it releases compounds called chemoattractants (Fitzpatrick et al., 2020). This is exertion of cryptic female choice and is totally at variance with the stereotypical fairy-tale narrative of conception.