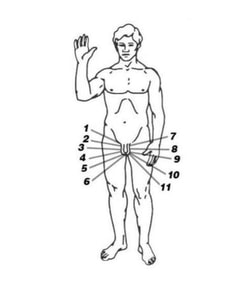 The term erogenous zone comes from the Greek words eros, meaning “love” and -genḗs, meaning “born.” It originally referred to the now declassified mental disorder of female hysteria and the apparent areas of the body which evoked orgasm as a form of treatment (Ellis, 1914).
​
In the 1930s, fashion historian James Laver and psychologist John Flugel theorized that women’s fashions were governed by the “seduction principle” and their clothing was designed to attract. According to them, women’s fashion attracted men by selectively exposing and concealing various parts of the female anatomy. Thus, fashion change was based on “shifting erogenous zones.”

So, erogenous zones have historically been defined as areas of the human body which may generate a sexual response. Specific areas of the body, such as the lips, nipples and genitals, are associated with sexual response because they have a high density of nerve endings and may have a capacity to stimulate arousal (Schober et al., 2011), especially compared to normal-haired skin (Winkelmann, 1959).