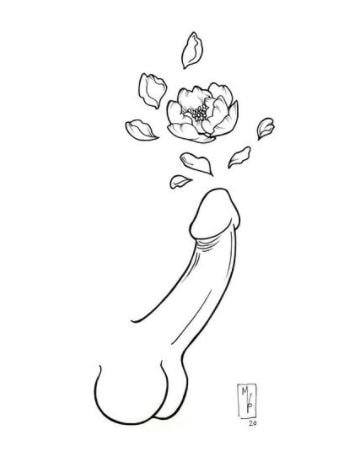 Does it make a difference if it dribbles or shoots? Well, seminal expulsion occurs when semen is propelled along the urethra and out through the penile meatus with coordinated contraction of the external urethral sphincter, the bulbocavernosus, the ischiocavernosus and pubococcygeus muscles (Shafik et al., 2005). Therefore, it has been theorized that the stronger these muscles are, the more velocity an ejaculation has (Watson, 2018).
.
One study (Lee et al., 2014) observed three ejaculations of fifty different men and categorized them into three grades based on the distance travelled while lying in their back; (1) overflow – where the seminal fluid just dribbled out, (2) below the belly button, and (3) above the belly button. 54% of the men had a grade 3 force of ejaculation, while 32% had a grade 2, and 14% had a grade 1 force. 62% were a complete match on all three ejaculation samples. Those who had a grade 3 ejaculatory force reported significantly higher scores of orgasm satisfaction than grade 2 or grade 1. Thus, in this study ejaculatory force was found to be associated with orgasmic satisfaction.

According to Kasman et al. (2020), lower strength of ejaculation is positively associated with increasing age. While I know that some men I’ve spoken with perceive their orgasms as more pleasurable when they shoot their ejaculate further, and it appears there is some evidence to suggest that this may indeed be the case, this isn’t to say that an ejaculation which dribbles is any less pleasurable, because ejaculation doesn’t equal orgasm and pleasure isn’t limited to ejaculation.

Whether you dribble or shoot, there’s no need to judge an ejaculation. Shooting far may be a good party trick but if you dribble it doesn’t mean anything negative about your pleasure or function.