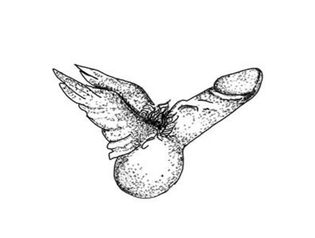 In ancient Roman religion and magic, the fascinus or fascinum was the embodiment of the divine phallus, often depicted as a winged phallus.

The English word “fascinate” ultimately derives from the late 16th century Latin fascinat, in the sense “bewitch,” from the verb fascinare, from fascinum, “spell, witchcraft.”
.
Roman myths suggest that the phallus was an embodiment of a masculine generative power, regarded as sacred. Winged phallic charms were ubiquitous in Roman culture, appearing as objects of jewellery such as pendants and finger rings, relief carvings, lamps, and wind chimes.

Fascinus was thought to ward off evil from children, mainly boys, and from conquering generals. The protective function of the phallus is usually related to the virile and regenerative powers of an erect phallus.

The magic of the divine phallus was manifested in it’s capacity for tumescence and detumescence, that is to become erect, then flaccid, essentially dying, and becoming erect again, being re-erected, or resurrected.