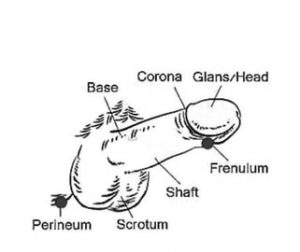 The parts of the penis are the base, shaft, glans, and foreskin. Additionally, there is the corona, frenulum, scrotum and perineum.

Two areas of the penis that I encourage people to pay particular attention to are the frenulum and the perineum.

The frenulum of prepuce of penis, often known simply as the frenulum, is an elastic band of tissue under the glans penis that connects the foreskin (prepuce) to the vernal mucosa, and helps contract the foreskin over the glans.

So, the frenulum is where your foreskin meets the underside of your penis. It looks like a small V just below the head. Usually part of it remains after circumcision. And for many people, it’s very sensitive.

The perineum is generally defined as the surface region between the pubic symphysis and the coccyx, the area between the anus and the scrotum. The superficial perineal pouch also contains erectile tissue.

So, the perineum is rich with sensitive nerve endings, particularly the pudendal nerve, and gets more sensitive when you’re turned on.

While this can be pleasurable, it does bypass and somewhat neglect the frenulum and perinuem, this limiting the amount of sensation you can experience. If you want to take your pleasure to the next level, try incorporating frenulum and perinuem stimulation into your sexual exploration.