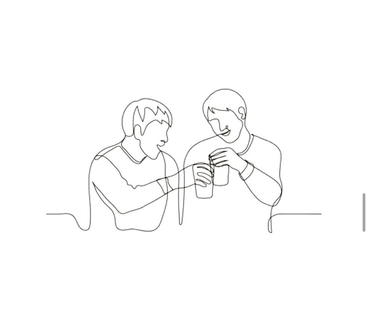 I’ve been in plenty of situations where a group of men are talking about sex. Something I noticed, especially when I was younger, is that many men boast about their sex lives to appear more manly. Men tell sexual jokes and share real or exaggerated stories to present an image of themselves which demonstrates their masculinity (Korobov & Thorne, 2006; Korobov, 2011).

I also noticed that the way men talk about sex with each other is usually pretty derogatory towards women. Sexual objectification of women is a common theme in men’s conversations with their male peers (Flood, 2008; Stombler, 1994). Allen (2005) said this linguistic posturing is a way in which men achieve ascendancy over subordinated others.

In other words, men tend to tell their mates stories about sex which position them as God’s gift to women or at least as the person with agency. They’ll share stories that affirm their manhood and hope to receive approval from their male friends.

Kimmel (2009) even found that some men make sexual decisions while also considering what their mates will think about such a decision. Some men will even pursue women they’re not personally interested in just so they can get their male friends’ approval (Elder, Brooks, & Morrow, 2012). I’ve definitely felt pressured by my mates to have sex with someone who I wasn’t particularly in to.

From speaking to a lot of men, this is a pretty common message. In fact, Trinh and Choukas-Bradley (2018) found that the most common message men receive from their male friends about sex is “just do it,” encouraging men to have sex whenever possible and to accrue as many partners as possible.

It is important to note that masculinity does not necessitate sexual experience. The pressure that men put on other men to have sex is typically detrimental for everyone involved.