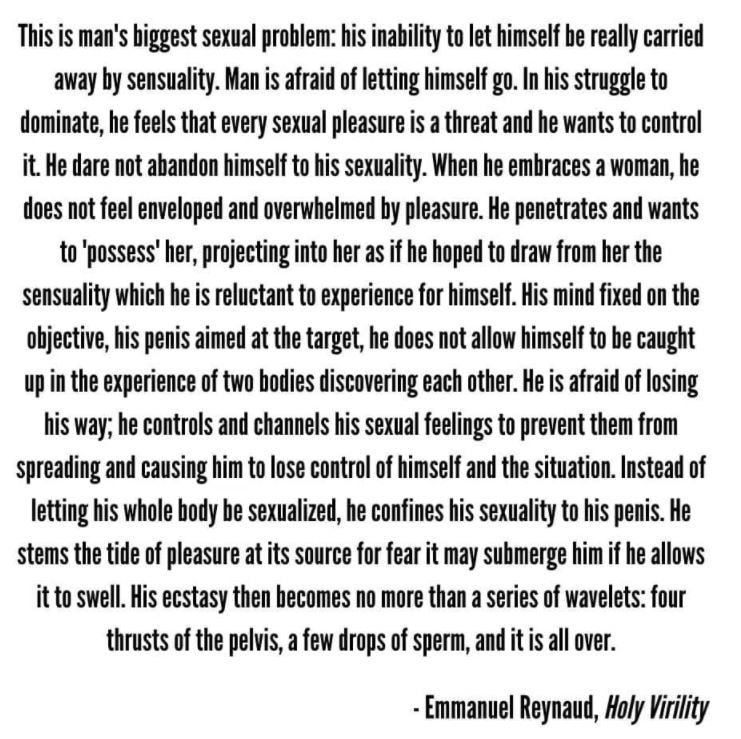 “This is man’s biggest sexual problem: his inability to let himself be really carried away by sensuality.

Man is afraid of letting himself go. In his struggle to dominate, he feels that every sexual pleasure is a threat and he wants to control it. He dare not abandon himself to his sexuality. When he embraces a woman, he does not feel enveloped and overwhelmed by pleasure. He penetrates and wants to ‘possess’ her, projecting into her as if he hoped to draw from her the sensuality which he is reluctant to experience for himself.

His mind fixed on the objective, his penis aimed at the target, he does not allow himself to be caught up in the experience of two bodies discovering each other. He is afraid of losing his way; he controls and channels his sexual feelings to prevent them from spreading and causing him to lose control of himself and the situation. Instead of letting his whole body be sexualized, he confines his sexuality to his penis.

He stems the tide of pleasure at its source for fear it may submerge him if he allows it to swell. His ecstasy then becomes no more than a series of wavelets: four thrusts of the pelvis, a few drops of sperm, and it is all over.”