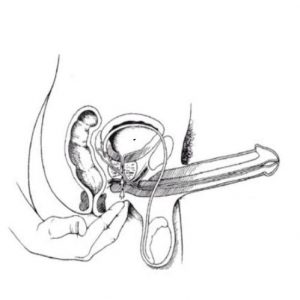 Many men ask me about ejaculation control and state that they’re somewhat familiar with Mantak Chia’s 3-finger, Million Dollar Point technique. Something I always make abundantly clear in my work with men is the dangers of using such techniques.

The reason is simple: You are using external force to stop ejaculating. Now, this may well be ok if your intention is just to not externally ejaculate. But, if you’re concerned about circulating sexual energy, having different kinds of orgasms, and making sure your pelvic muscles are healthy, the Million Dollar Point technique is not useful.
The applied force to the perineum traps sexual energy in that area, which can cause physical and energetic complications. This is because you’re creating a stoppage, not a recirculation of sexual energy.
This forced stoppage of sexual energy creates congestion and, if done too regularly, can also create a stopping pattern in the body. This manifests as physical tension and tightness in the pelvic floor, which actually hastens the urge to ejaculate and limits your capacity for experiencing pleasure as well as different orgasms.

While there are some effective ways to use the Million Dollar Point technique – utilizing a combination of massage, breathing, and visualization – I’ve found that many practitioners become falsely obsessive with stopping ejaculation at any cost, which can lead to sex-charged guilt when some seed is released. Which, in turn, creates a whole new set of anxieties and tensions.
Not only that, these kinds of techniques can actually cause retrograde ejaculation, where the seminal fluid is sent into the bladder and is then expelled during urination. So, in actuality, you’re still releasing your seed, perhaps just not when you think.

Ejaculation control is about the recirculation of sexual energy. If you’re relying on creating a forced blockage at the perineum because your abilty to recirculate sexual energy is not good enough to re-direct the ejaculatory impulse to the rest of the physical and energetic body, you are doing yourself more harm than good.